Getting lost and overwhelmed by the never ending beauty Iceland exudes is easy to do.  In fact, that is the very reason why couples flock here and / or become addicted to this unforgettable island!  The landscape make you feel small and a part of something so much bigger.  Likewise, you’ll walk away with a “don’t worry be happy” feeling or the Icelandic version, “Þetta Reddast!”  Leaving the island fully renewed and inspired.  High school sweethearts, Megan and Ryan always had eloping on the agenda and Iceland on the bucket list.  So when it came down to it, planning an ethereal Iceland elopement was nothing short of perfect!

Stories about couples being high school sweethearts and withstanding the test of time have often been in short supply.  Certainly brought a smile to our Iceland Wedding Planner teams faces when during our 90+ minute interview with Ryan and Megan that they boasted a meeting story like this!  As a matter of fact, rewind 8+ years ago during senior year, little miss Megan was copying off of Ryan’s chemistry homework!  Not only did they both walk away with A+’s but they found their way into a long term relationship!

Growing up together, literally and figuratively, taught them a lot about how the other works which made their foundation for communication unstoppable.  Being students most of their relationship time together, traveling together found its way further down the list than they would have liked.  However as they neared the end of their degree programs, they found their way to Paris France.  To Megan’s surprise, their romantic trip ended with a proposal in Paris!

Following that dreamy proposal adventure, they couldn’t help but come home and begin brainstorming on how to plan an adventurous elopement!  Eloping to Americans once a upon a time, use to be instinctively runaway to Las Vegas.  Meanwhile, as the generations began to trasition from valuing experiences and not things, couples started asking the question of “what is an adventure wedding?”  Simply put, it is a way to elope that celebrates YOUR LOVE, YOUR RELATIONSHIP, in an UNFORGETTABLE place and way!!  Falling in line with this was Megan and Ryan’s desire to plan a ethereal Iceland elopement. 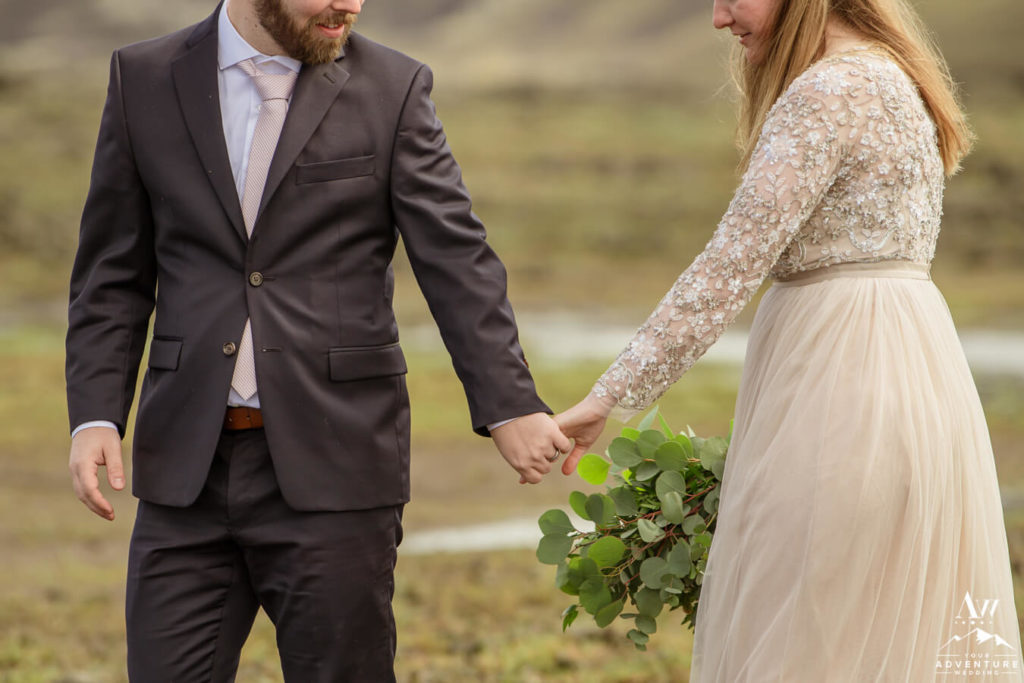 Spoiling yourselves at least for two days of your adventurous elopement in Iceland is important!  When Ryan and Megan reviewed our custom proposals they loved the idea of spending several days in the lap of luxury at Hotel Grimsborgir in South Iceland.  Furthermore, because these two were our clients, they received an upgrade from a superior room to a suite!

Their ethereal Iceland elopement began at 6am on June 28th.  Just a few days after the longest day of the year, so the sun wasn’t going to ever set!  Our local Iceland elopement photographers began with capturing the bride and grooms details as Megan did her own hair and makeup.  Room service for breakfast followed and then it was on to grabbing their Iceland wedding “go bags” and loading into the super jeep!

The energy in the super jeep was bouncing off the walls!!  Also the drive to their offbeat waterfall location was pretty darn fun too!  They saw volcanoes, glaciers, lakes, and crazy shaped mountains all along the way!  Grabbing our fabulous Iceland wedding celebrant on the way, they arrived to their secret waterfall.  Totally starstruck and in awe of the uniqueness of the landscape.

Tying in a bit of tradition, these two almost newlyweds wanted to hold an Ásatrú wedding ceremony.  By definition, the organization Ásatrúarfélagið, “is an Icelandic religious organization of heathenry.”  Allow us to elaborate a bit… Ásatrú is a mix of Nordic mythology and Paganism.  The ceremony brings nature and power into your ethereal Iceland elopement ceremony.  Plus who doesn’t want to hold an oath ring when saying your vows and celebrate the nuptials by drinking from a Viking horn?!

Being able to enjoy a majestic place all to yourself is incredible!  You just look out and have thoughts like, “How can a place like this exist?”  It’s unreal and otherworldly.  Therefore, an ideal place to hold an ethereal Iceland elopement!  Next, after these two newlyweds had time to explore and take the area all in, their Iceland wedding photographer capturing these two savoring every second of it from the ground and from the drone!

Best Place to Elope in June

June in Iceland comes with an endless amount of summer daylight.  Fun Fact, Iceland was in a DROUGHT this summer (2019) making everything super duper dusty.  Lunch followed at our next Iceland wedding location along with adventuring around a hidden waterfall.  Champagne and waterfalls just go so well together!

Highlands in any country usually hold special and truly amazing landscapes.  For example, if you already haven’t heard of them, Isle of Skye are considered the Scottish highlands and Patagonia are often referred to as highlands for Chile and Argentina.  In contrast to this, the Icelandic highlands are a whole other beautiful beast!  Places that will totally blow your mind!!

Especially if you love… Crazy shaped mountains, lunar landscapes, stunning waterfalls, and unique tones and textures!  To illustrate further, just come along with us as we see Megan and Ryan trek through more of the highlands during their ethereal Iceland elopement! 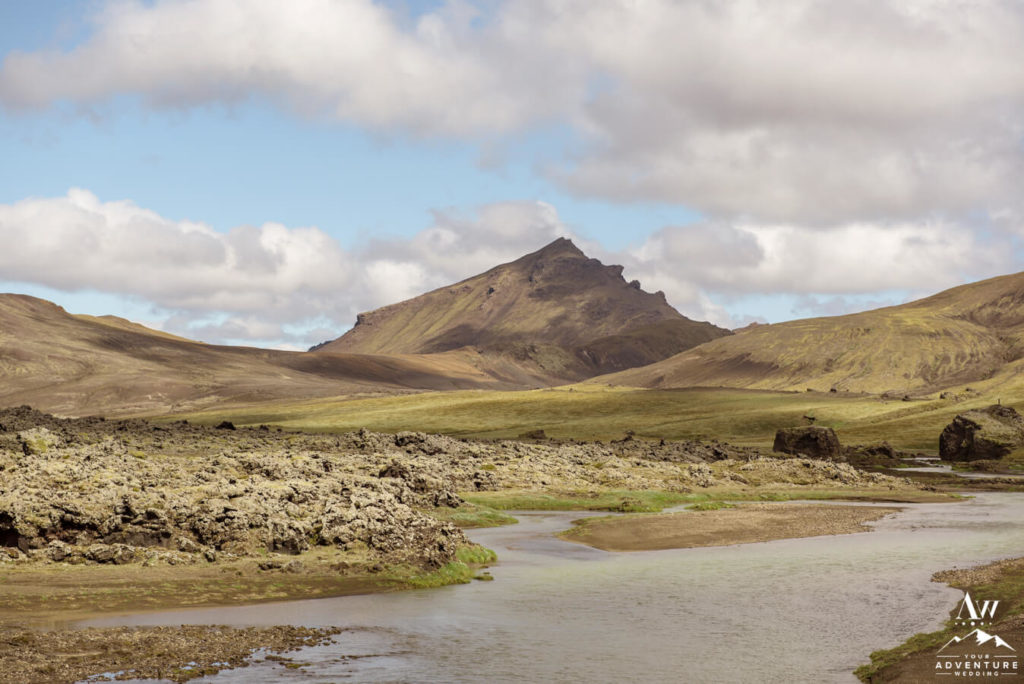 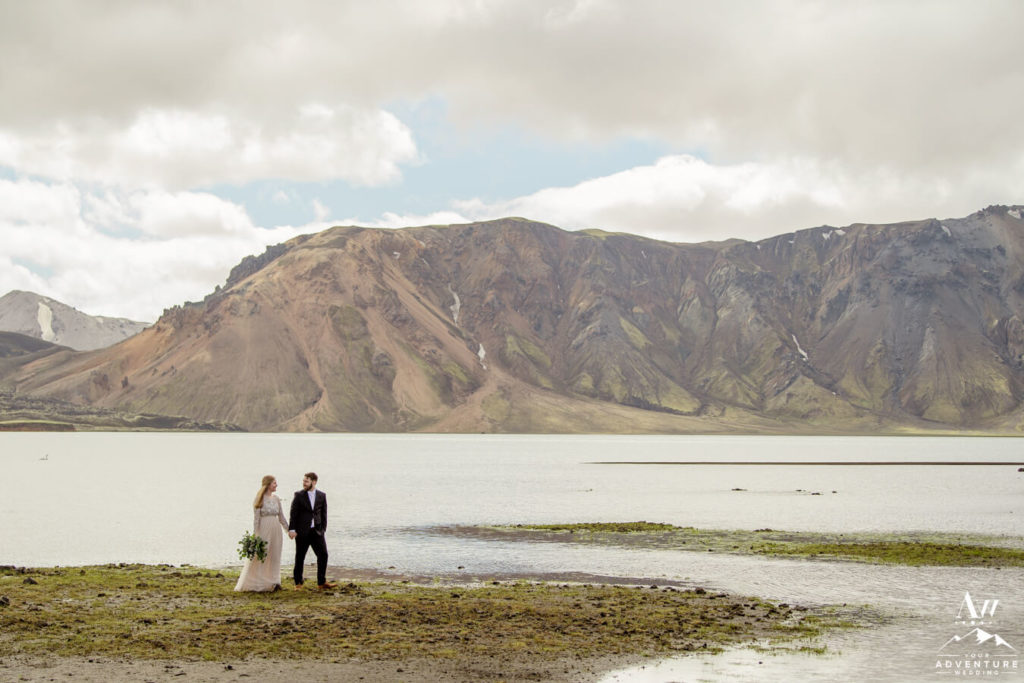 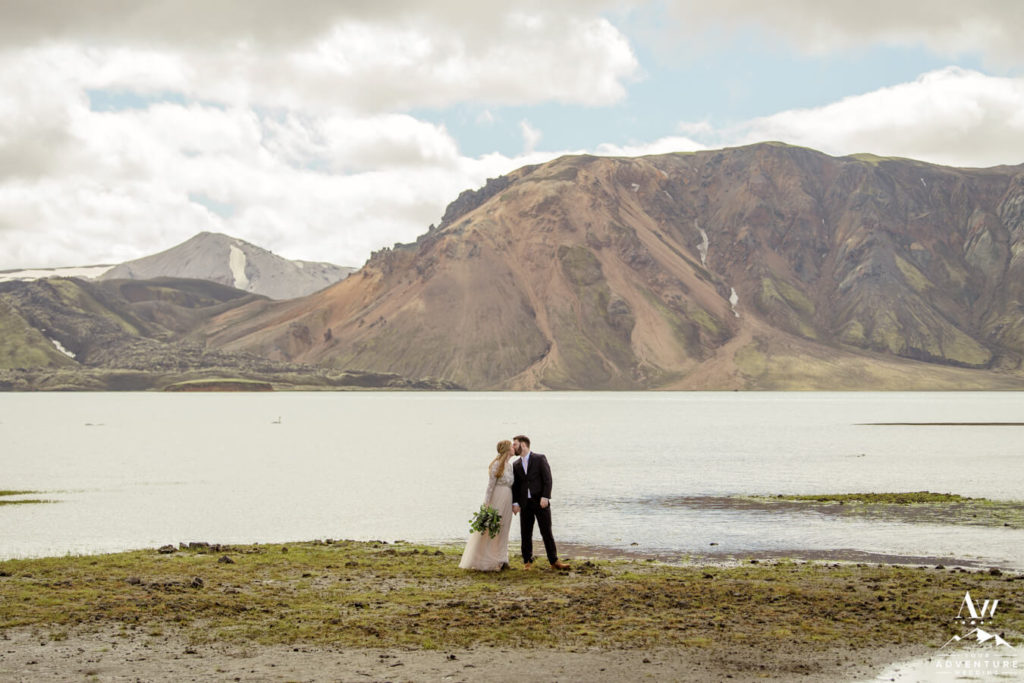 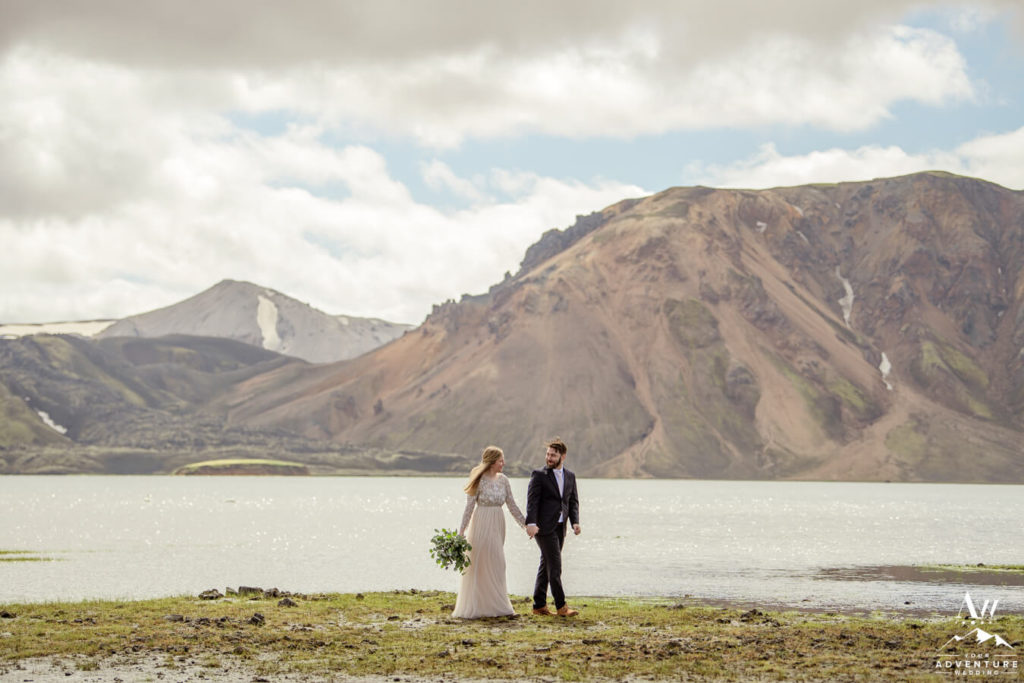 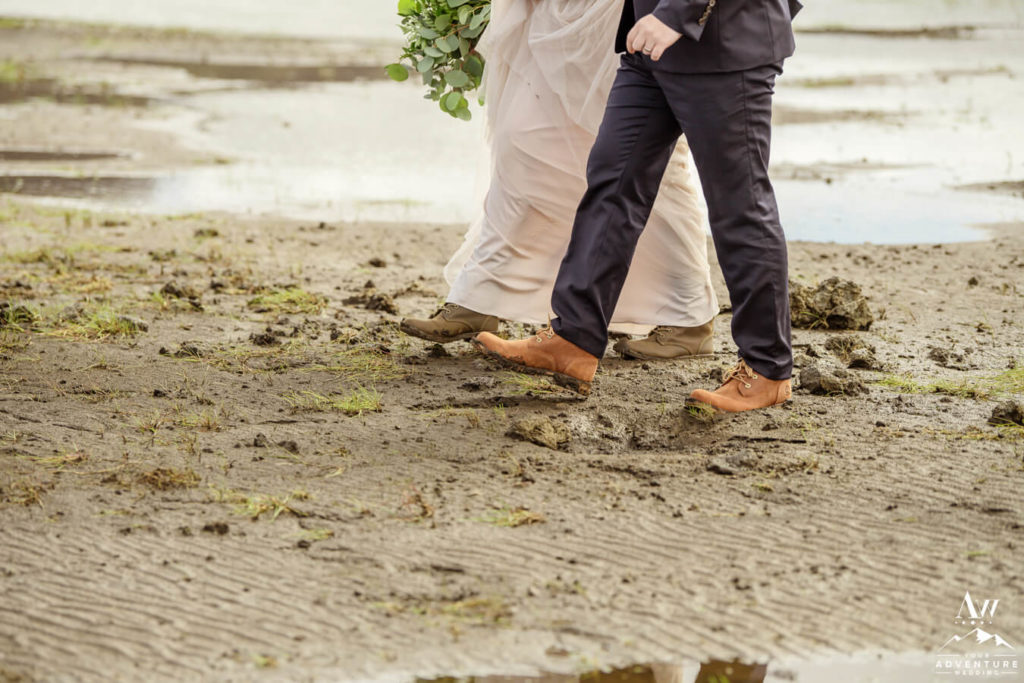 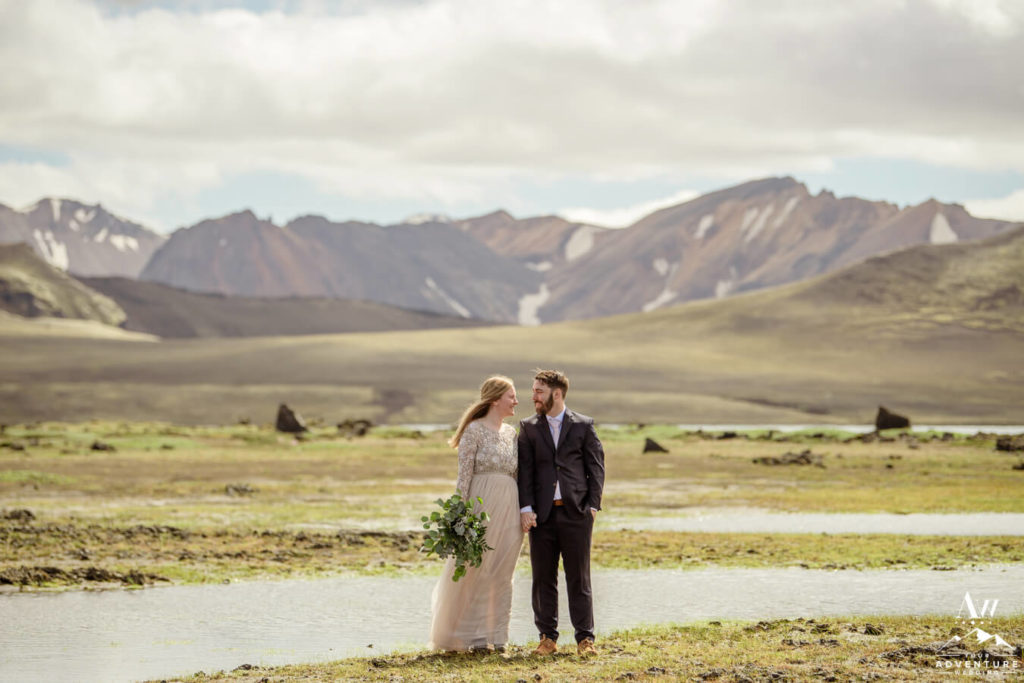 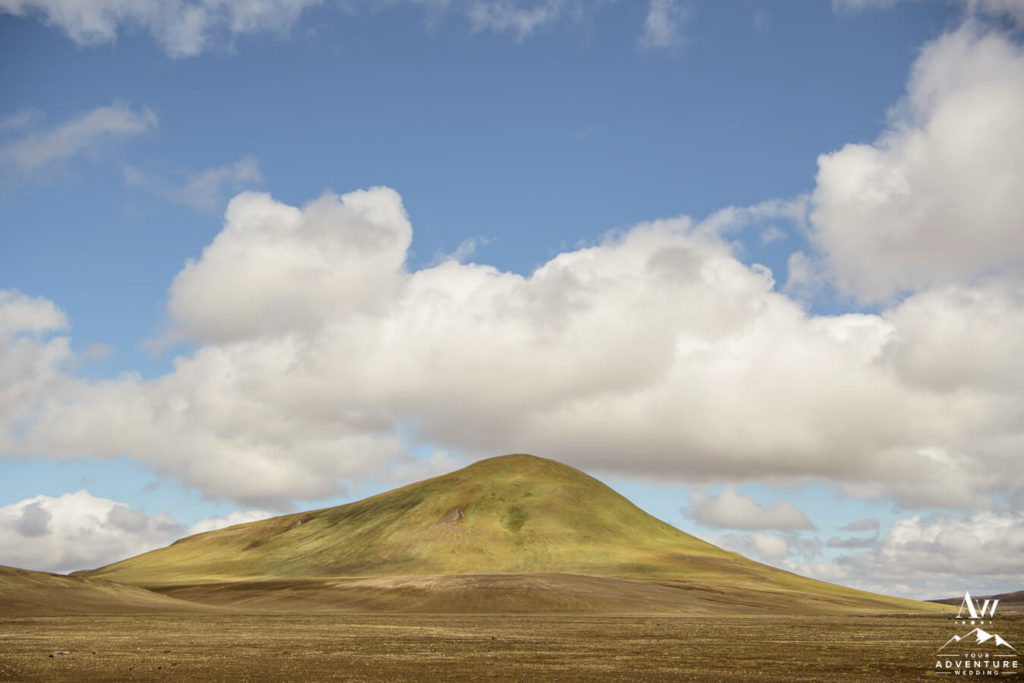 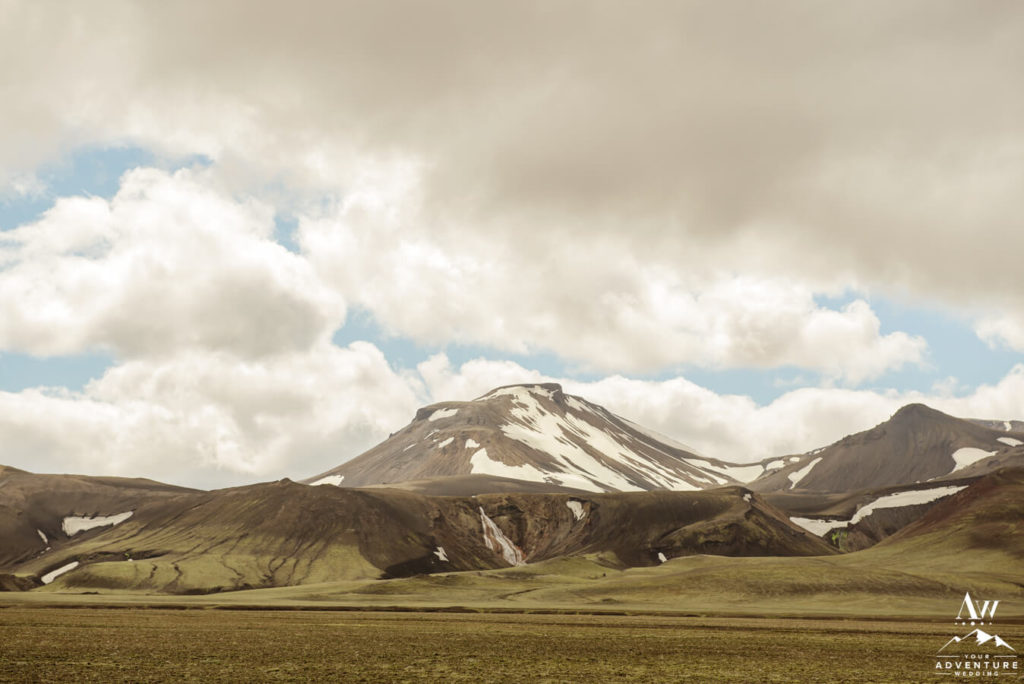 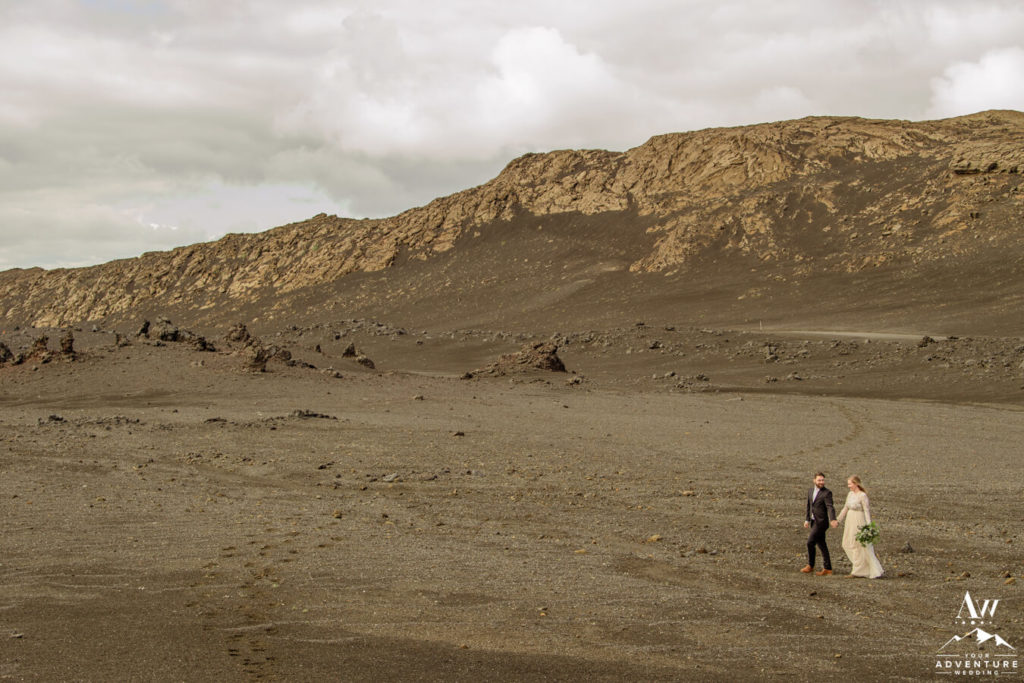 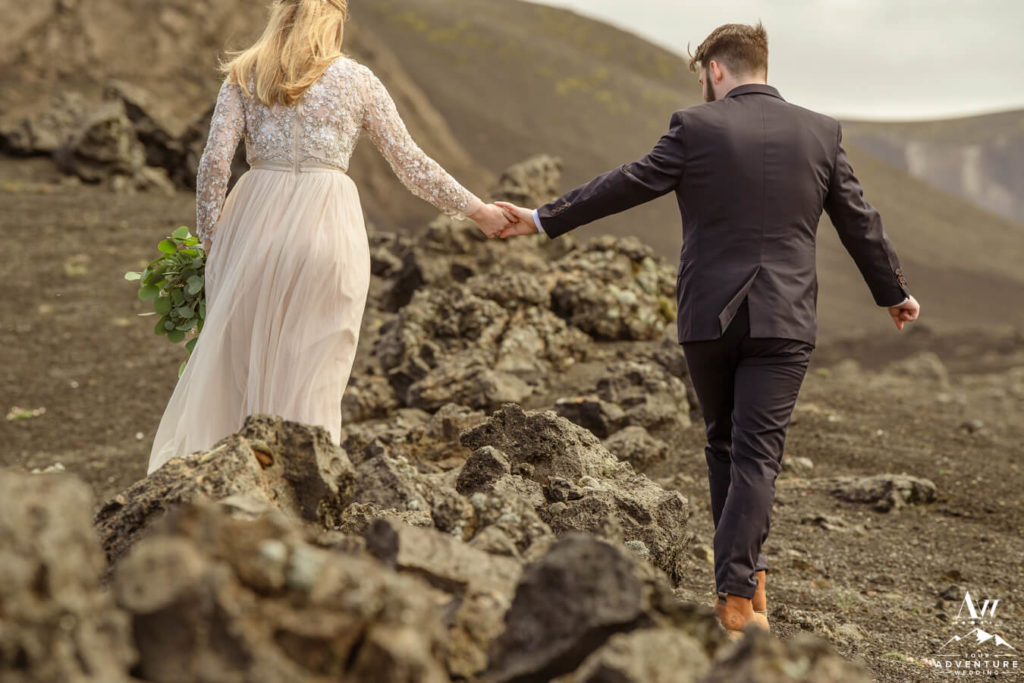 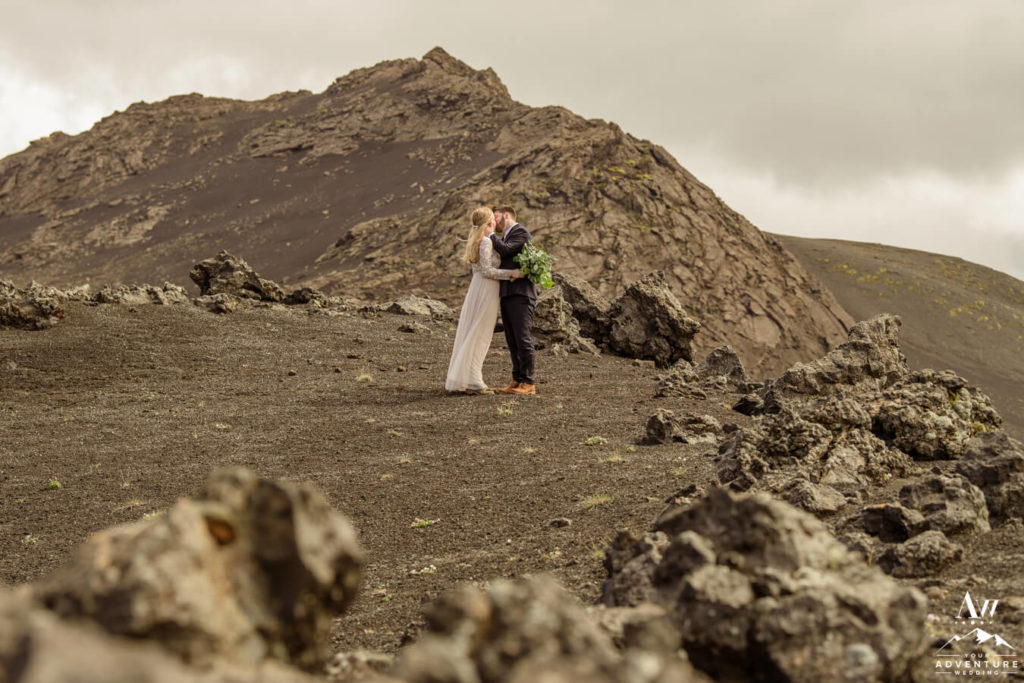 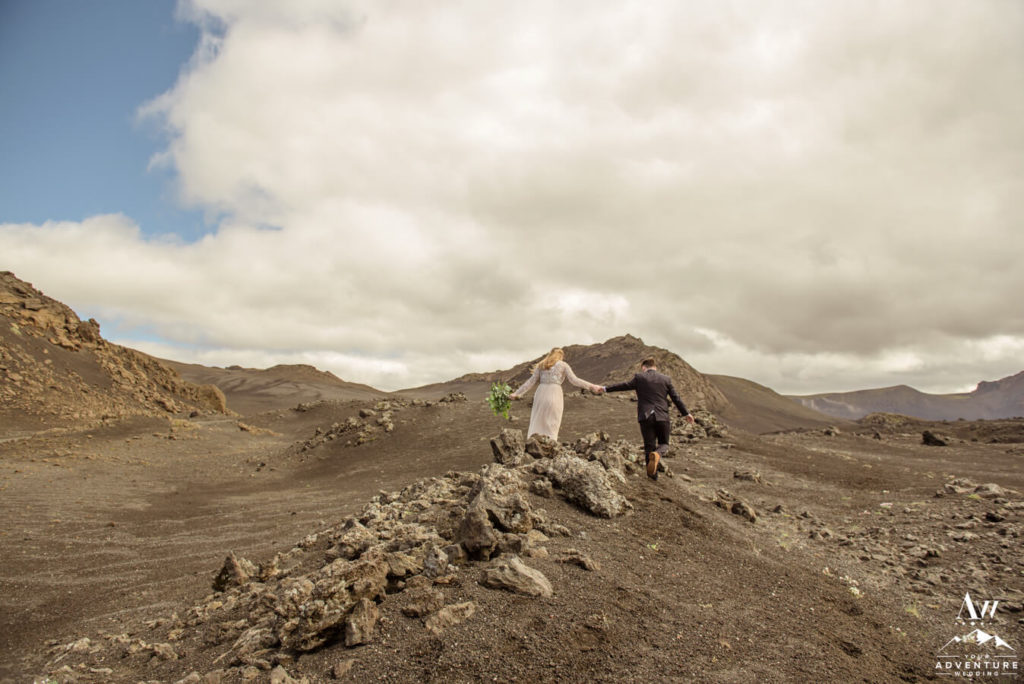 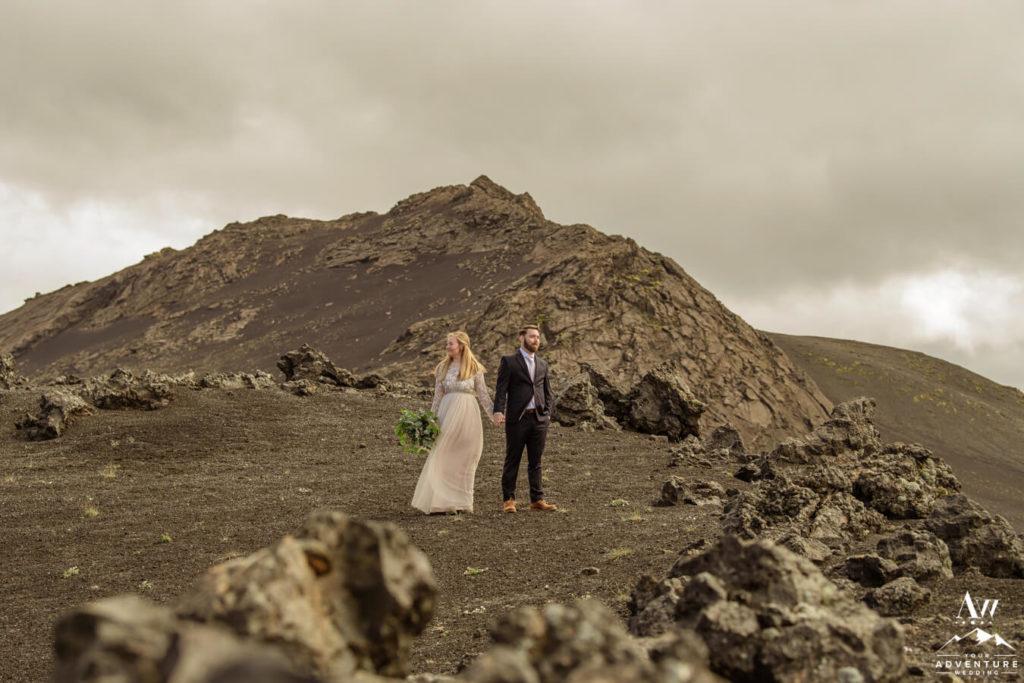 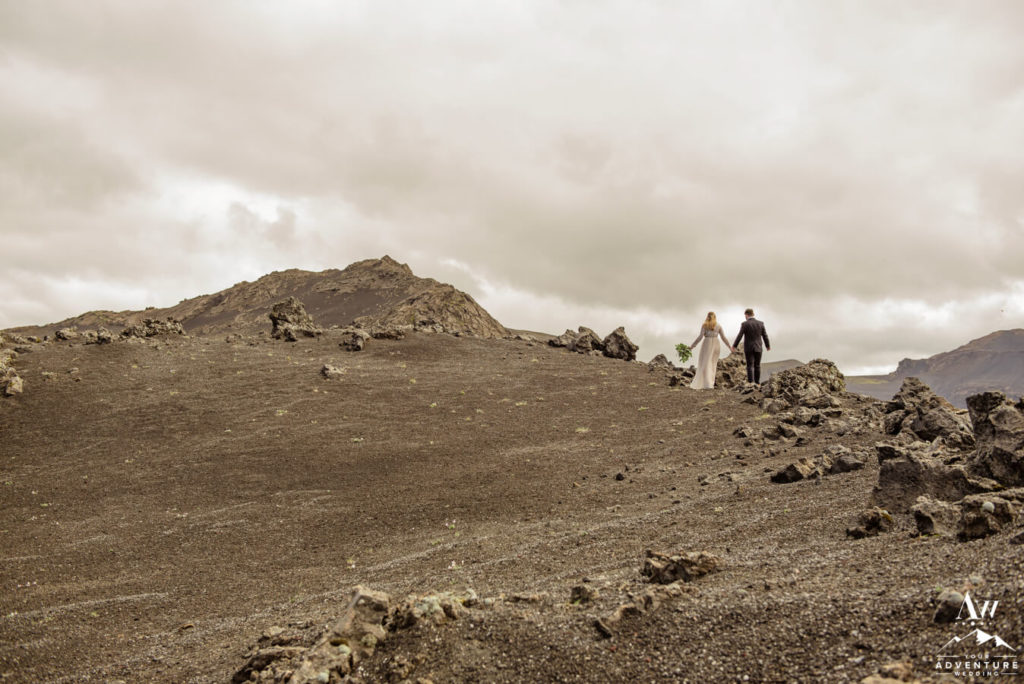 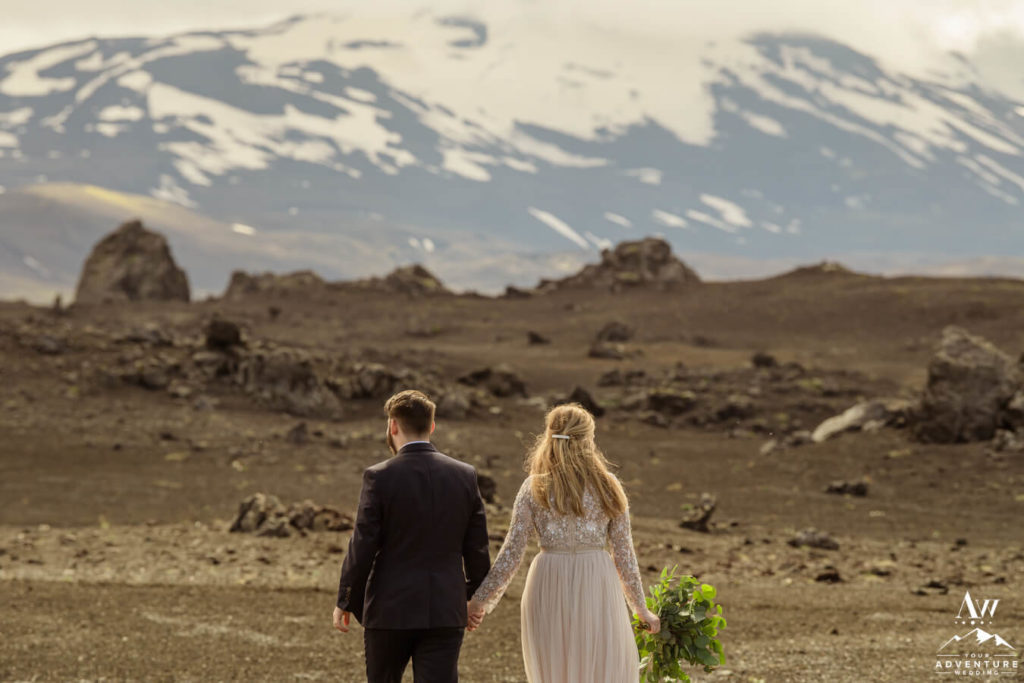 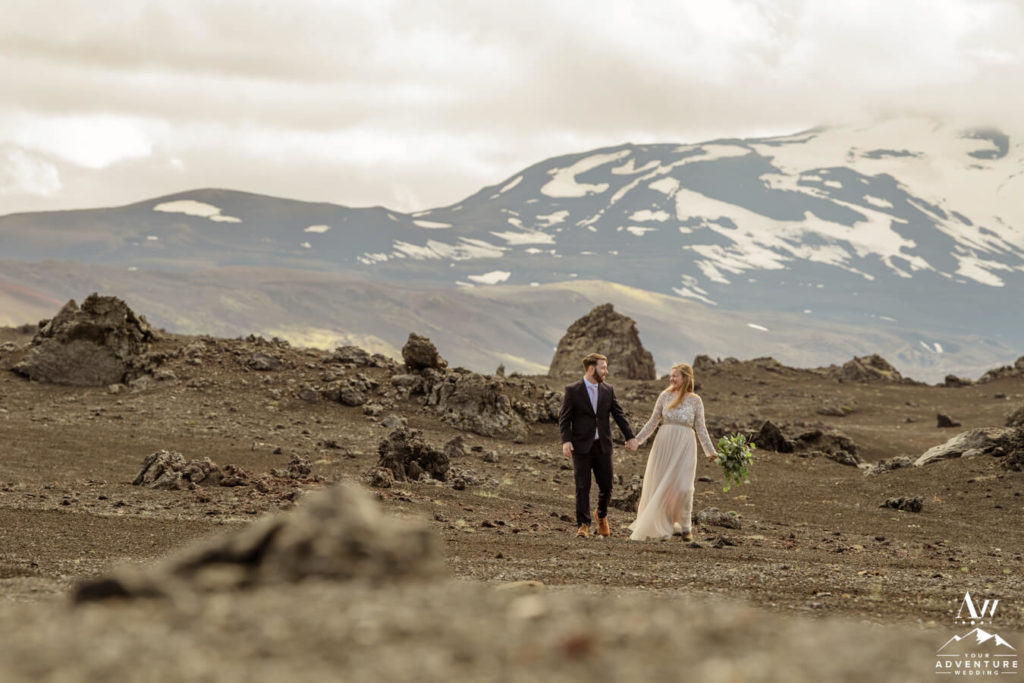 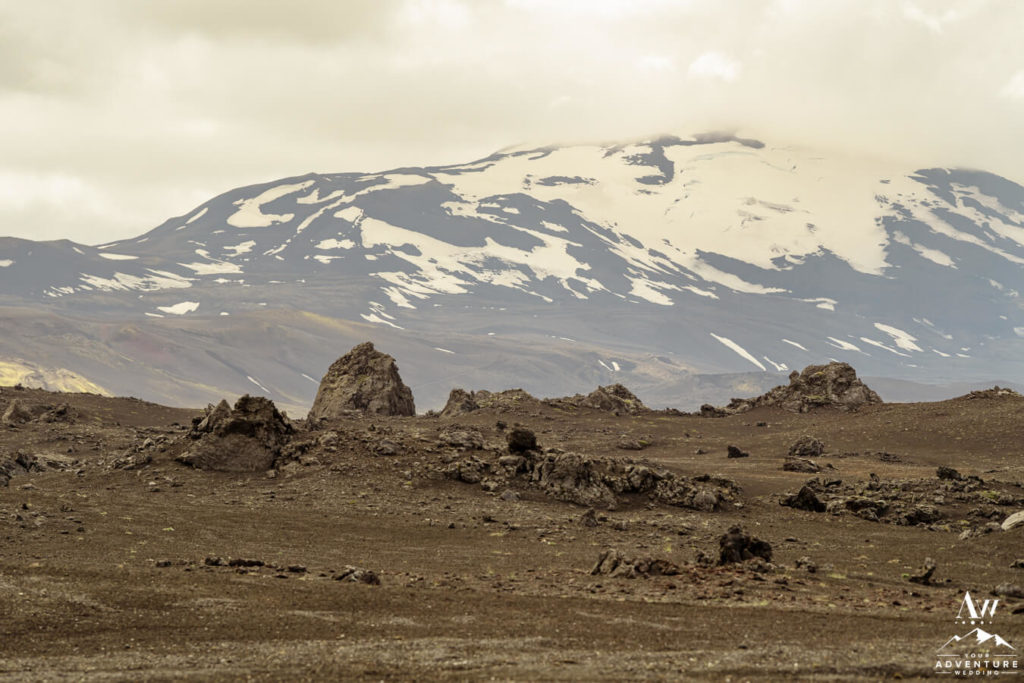 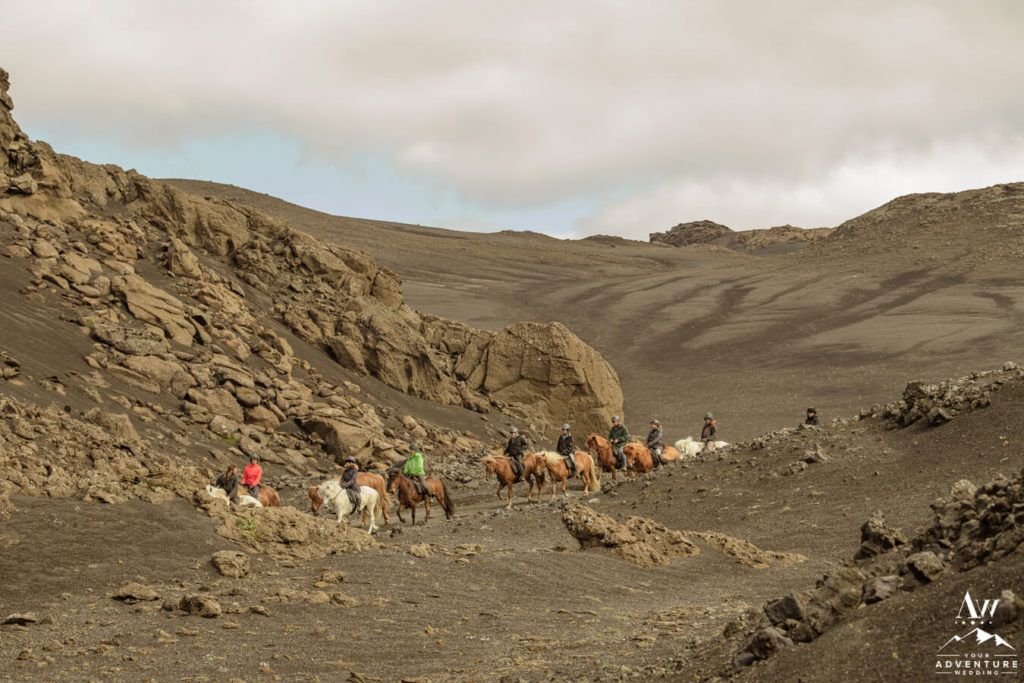 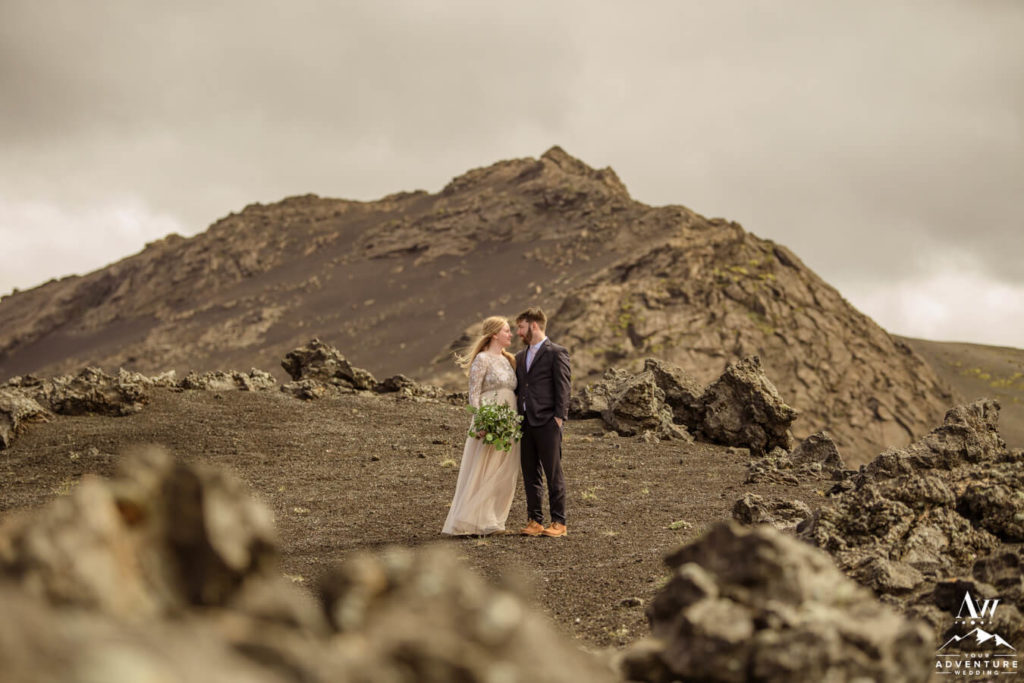 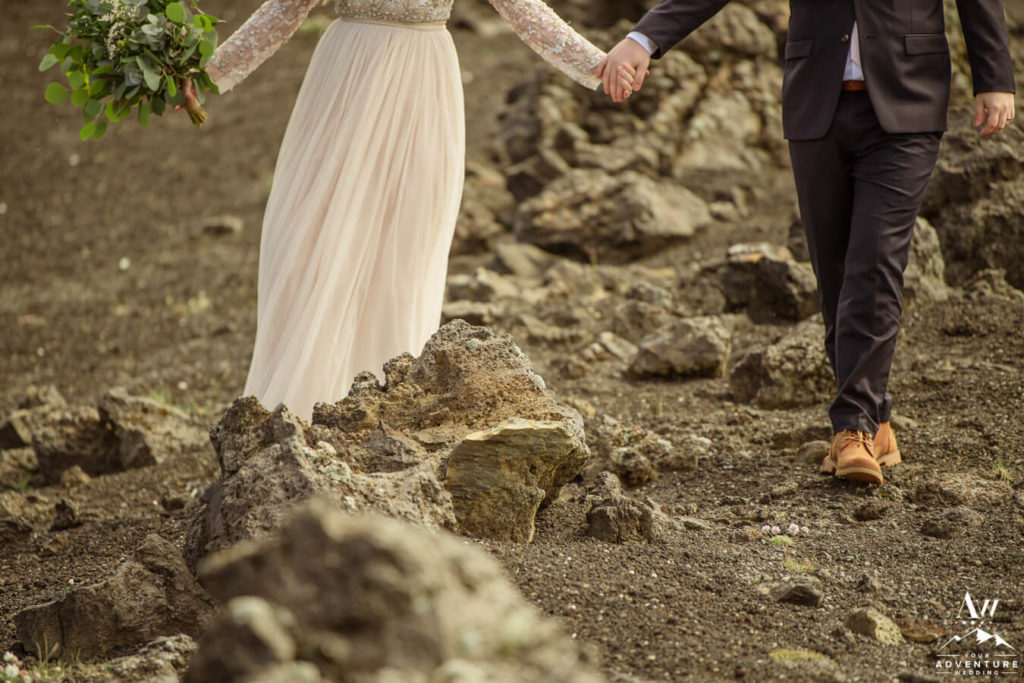 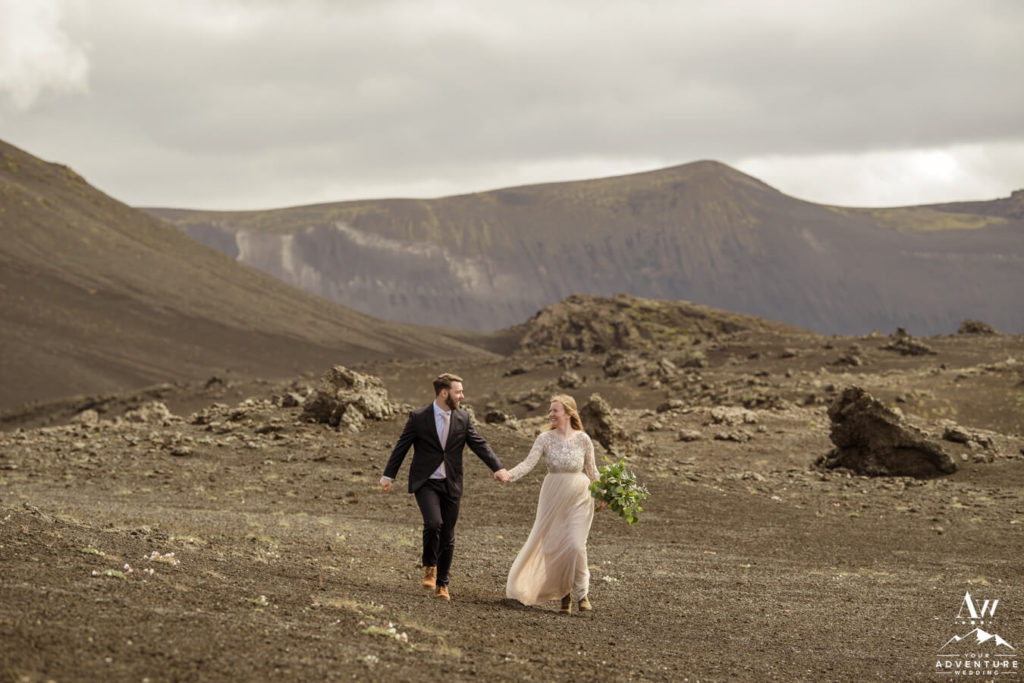 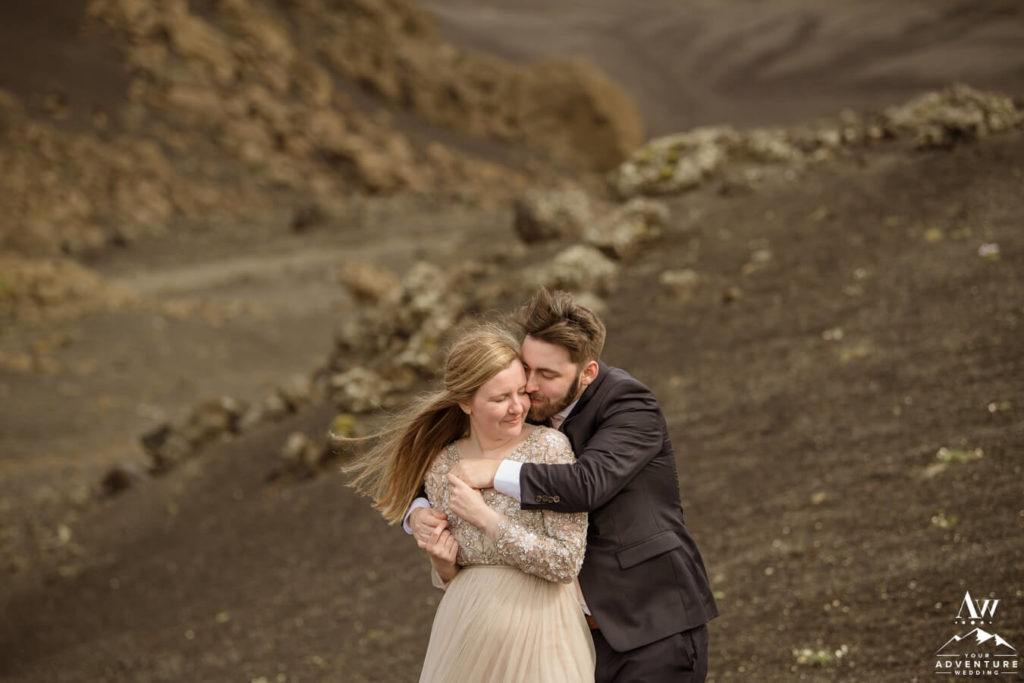 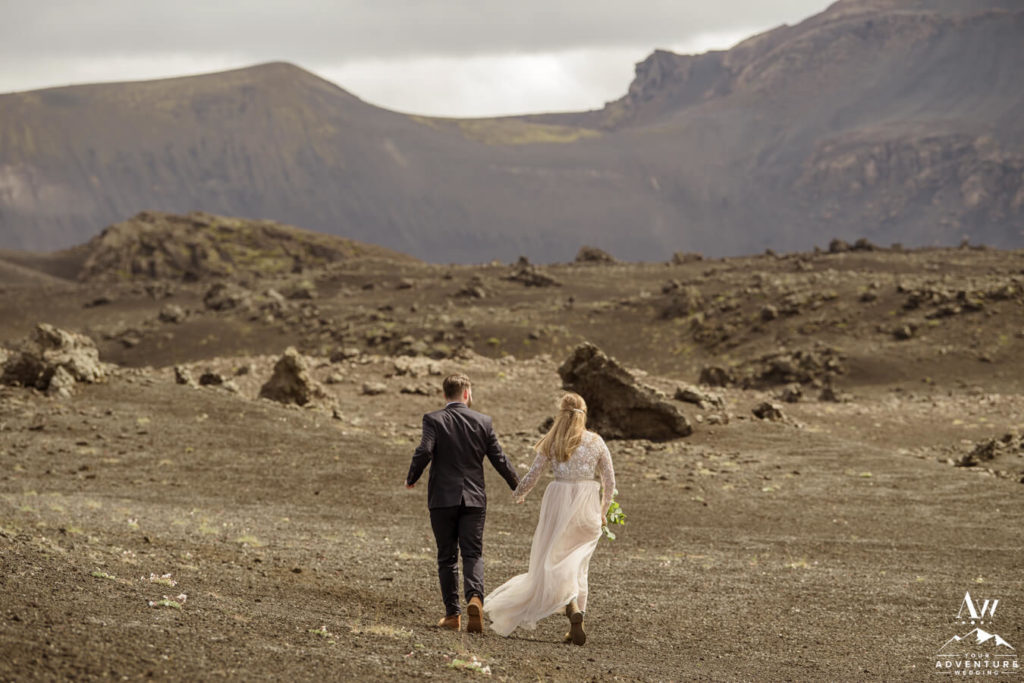 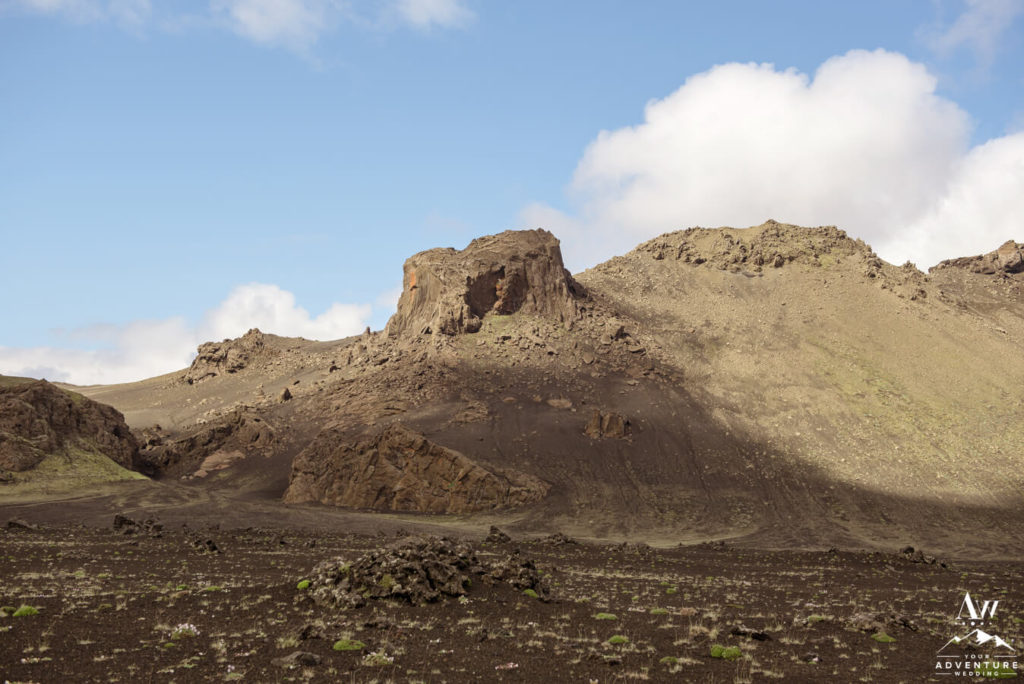 Undoubtedly, when planning a trip to come to Iceland you have got to experience a volcanic black sand beach!  Many of our adventurous elopement couples have it on their “must do” list and we do not blame them as all the beaches in Iceland are pretty darn spectacular.  For instance, the beach our Iceland Wedding Planner took Megan and Ryan is what we like to call a “dune” beach.  The colors are so vivid between the sand, grass, and water!

Who needs a volcano when you have Geothermal heat?!

Nearing the end of the day, the sun although it doesn’t set in June, it does drop behind mountains or hide behind clouds.  For instance, when this happens the temperature drops quickly.  We believe it adds to the romance of the day though because it encourages more cuddle action!!  Specifically also because the last Iceland wedding location these two would adventure to was a steamy private geothermal area!  Even the lambs were there warming up!  …Can you spot them in the ethereal Iceland elopement photos below?

Have your Cake and Eat it too!

Sometimes a 10-12 hour adventure elopement day is just the right amount for you.  And you don’t want a camera in your face or secretly behind you capturing your every move once the adventure concludes.  We get that and appreciate giving you guys space.  Upon returning to Hotel Grimsborgir, these two had a few minutes to rest and refresh, say goodbye to our team, and decided to do dinner early so they could enjoy their private hot tub!  They may also have taken their traditional kransakaka to go 😉

Seriously this is one of the best reasons to choose to elope in Iceland… You get to explore and do things your way!  So have your cake and eat it too wherever the f*ck you want!

Empowered after witnessing Megan and Ryan’s ethereal elopement in Iceland?  Our team will be your guru’s, lighthouse, shinning star, comedic relief, brainstorming wall, and in your court the entire time as your personal adventurous elopement cheerleaders!  Screw the family and friends who want your wedding day to be about tradition or them.  Remember it’s about YOU TWO, YOUR LOVE, and kicking off the next part of your love story!  Ready for us to craft your very own exciting Iceland elopement package?  Please contact us for more information on getting that adventure started!